Can Online darts hold its Place.

Now all i can see across my social media feeds is people advertising darts knockouts for online play and the most i have seen so far has been £15 to enter a event with it been a money in money out event. If someone had asked you in January to play darts online and pay £15 for the privilege i'm sure you would have told someone where to go. However with the current climate online darts has become the only way to play the game we love but are you willing to pay £15 to play from the comfort of your home. Personally for me its a no, i don't mind chipping in to a £3 KO for charity but i cant see the value to paying the higher price to play online when there is so much that can go wrong.

We have run 5 knockouts so far online and they have all been received very well by players in our area and a little further afield with on average 24 players playing in each one, when we put these out to the players i had many messages sent to me asking how i was going to admin the event and police the event, and my reply was simple.

Don't Cheat and i wont have to do anything !

"You are only cheating yourself"

This is the most true comment ever but there are them players/people out there not just online but as i have seen in pubs and clubs that have also cheated took a S1 out and said it was in the 20, with online darts and depending how their camera sits and quality this opens this up to more possible cheats claiming the big scores.
I start games slow at times and my scores for my first 12 can be 41, 59, 45, 60 and then i can find my game and hit 121, 140, 137 etc and this gets me wondering is my opponent sitting their thinking hes gone from hitting 41's to 137's what ever pal!
Yeah i can see how it looks and even with my board shown on my phone camera it does play on my mind, personally i don't look at my opponents board, if they are putting in scores of 25,37,140,157,180,26 that is up to them but on the flip they could have also been the same as me slow to get into games but with a money paid event are you willing to accept that your opponent was slow to get going despite the fact you don't know if they are throwing from 5ft off a bar stool with a pint in hand.

All in all online darts has grown massively over the last 8 weeks with the sales of webcams up and also extendable phone holders on amazon been brought up and of course its not just for using with darts but i'm sure a good portion of these are been used to play darts with.

This all been said if we are told come August that the pubs are going to reopen and we get back to some form of normality and our local darts leagues start up again what happens to online darts will people still play online now that they have found it, i think the answer is going to be yes, most will now see that they can play a game of darts at home with a beer same as in a pub and doing it this way some coin will stay it the pocket more. Of course we all want to play in live events and leagues and this will never change but if you play Tuesday and Friday nights you could now play in a online league Wednesday or Thursday to stop the partner from moaning about going out for another night of the week, yes i do speak from experience here.

So what will be the process moving forward be, the use of Facebook now over websites and forums is massive and growing more and more, dont forget that DartsInStoke use to be a internet forum before we closed it due to lack of use and moved to a website and social media. What is needed is a central hub on Facebook for all online events of darts instead of the 27 groups and pages you have to follow and then miss out on posts on these pages because your friend has posted a picture of his dinner on your timeline.
We at DartsInStoke will always try and bring all local and just outside our area events if they be online or live but i can see a shift soon to groups advertising just online events more than the physical events even in 18 months time.

To sum up as we do, online darts has given us players a chance to carry on playing, for me to fall back in love with my game and to meet and chat with new  players from aroudn the globe. 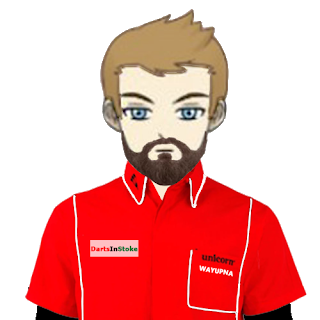 Posted by DartsInStoke at 8:12 AM