Practice is not making perfect..

So they saying goes "practice makes perfect" but im starting to debate if this is true or not.

Recently my game has not been going up but down, in fact my game and darts average is going down quicker than my mortgage this month. I'm putting the time in on the practice board and i have not changed my darts or routine, however when i have come to play i cant recall now the last time i won a game and the last time i hit a double on my first attempt.

So lets chat about my practice routines, when i go to the board weather it be at home or in the pub i go via the same routine

This is my normal practice routine, someways i will mix things up and add something different in using the GoDartsPro website perhaps play a game of A1 or doubles lock, just to keep it all fresh, so currently i'm getting good amount of time in at the practice board. Generally im throwing for about 70-80 minutes with the odd break for a drink and a snack, but im not seeing any results on the match board. At the moment im only playing in one league in the week so im putting the lack of competitive darts down to the poor play from me, but still i should be doing better in them games i feel with all the practice time i put in i should at least be seeing a double go in or a W in my column but no its just not clicking for me.

Take my last league match i played i hit the bull when i wanted to hit the 25 to leave me tops, so i was left with 15 a score of 15 not a fantastic leave i agree with you, but i was also coming back to the board to take it out i had 3 darts in hand to take a leg, something i cant recall last time i had chance to do this. I followed my normal outshout i would go as posted on the dartsinstoke checkout page ( https://www.dartsinstoke.co.uk/darts-checkouts ) yes single 3 for double 6.

I already know i will get a rift of comments from players saying no Shaun 5 for double 5 or single 8 for double 4 as that is also a progression you would be use to, but single 3 is a nice dart low and then you can reset and go for the D6 if you hit single 6 you have already got a marker down in the 3, at least thats my thinking.
I come up to throw and THUD a single 17, great my opponent wants 52 they will take this out i'm thinking but he does not and i get a second chance at the checkout first dart this time hits the single 3 and i compose for the double 6 and....... miss with both my darts in hand, my opponent comes up and had left tops and takes it out, and another defeat for me and another darts night where i have not taken a leg.

I shake hands with him, and the marker, alwasy be nice and thank the marker folks, and i walk over to where i was standing, tip my head to my teammates who i know are all saying why did he go that way for 15 and get my darts walk to the spare practice board in the venue and i throw for single 3, hit, throw for double 6 and guess what hit first time of asking.

This is the frustration with the game, i know i can hit them, i know i have the ability but it just does not flow when i need it too, every player has the same feeling im certain, but what part of the mental side of the game can help me get over this and take this practice game to the actual match-board.
I see and know players who dont practice darts in the week, they turn up on their respective darts nights throw a load of alcohol down their throat and win games 2-0 with a 70+ average, where as me i put the time in to practice and try to get better but its not helping me, i wonder should i not pick them up for a week and role up to darts night and just throw i cant be any worse than i currently am doing but that is not me, i dont have that switch i can do this, if i have not played for 3 days i get worries i will forget my throwing action and also i can see a difference in my throw when i dont throw for 2 days.

I begin to now question where my darts path is going, and what i need to change to get back to playing well and winning legs, because my fear currently as i write this, is that I'm going to fall out of love with the game again that i have just got the love back for, however i will no doubt sit and watch the BDO darts today and comment to MrsR at some point

"I will be there one day my love, i think i could give him a run for his money today"


Till we chat again, enjoy your darts and mind that oche folks. 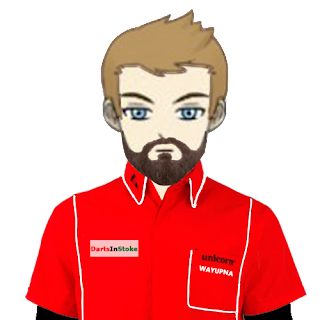 Posted by DartsInStoke at 6:39 AM